A lesson in creating and using niche business DSLs at scale

At Zerodha, we process millions of trades in real-time, where each trade comes into the system as concurrent high throughput HTTP requests. Each trade increases the latency for subsequent orders in the queue that are under processing at the same time at our OMS (Order Management System). When a single order comes through to the OMS, it goes through a bunch of computationally intensive validations and adds to the latency. To reduce the latency of orders, we decided to offload some of these business validations from the OMS into an external component called Veto, which pre-validates incoming orders based on custom dynamic rules set by our Risk Management team. Rejected orders never go through to the OMS thereby reducing significant load on the OMS. This is the story of how we incrementally built this engine to keep up with the changing business and regulatory environment starting with a custom DSL (Domain Specific Language) and ending up with writing a framework to manage rules written in Go and embedded inside Go plugins.

Our goal with Veto was to build a dynamic evaluation engine framework capable of hot-reloads. This framework would provide a generic environment to manage, track and audit rules and filters on an easily accessible dashboard. The engine should have support for custom data-stores related to the orders. Rules in this framework are business validations on orders placed by our clients. These validations range from simple checks like validating the limit prices to be within circuit limits, to complex beasts, which validate fresh buy orders in Nifty/BankNifty strikes due to exchange OI restrictions.

Our first solution utilized our research from the Sentinel project. We combined knetic/govaluate, which is an expression evaluation engine, along with a filter manager and a hot reload mechanism with an HTTP server which would either respond with an appropriate rejection to the incoming order or proxy to the upstream OMS, thereby acting as a reverse proxy with validations. The expression language was similar to Excel formulas, which was familiar to our RMS Team that managed and operated it through custom management dashboard built using Frappe/ERPNext.

After taking it live, we realized a bunch of issues that cropped up and became pain points for us over time. These were not really technical, but more or less, human usability issues.

Our learnings from these issues made us reflect if it would be worth it for the operators to keep using a simple expression language. The way we were going, we were essentially building a DSL (Domain Specific Language) on top of govaluate, that would keep getting more complex with time.

We finally decided that a solution to the problem was to use Go-like language as the DSL instead of govalute and distribute the dynamic rules as Go plugins, as Veto was written in Go in the first place, just like the rest of the Kite stack. It is simple, easy to learn, and has good tooling around it.

We debated heavily on the best approach to solve the problems that we were facing with veto rules and shortlisted a few candidates. We picked a complex rule in production written using govaluate and wrote that in the following to benchmark the performance of the rules in the alternatives.

We considered govaluate to be the baseline for our experiments. In our benchmarks, native plugins outperformed other solutions and brought the power of the entire Go runtime into independent plugins. We discarded Hashicorp plugins, as they were slower. Yaegi was nice, but not as fast as govaluate. Govaluate and Yaegi provide a simpler way to distribute rules, when compared to native plugins which need a bit of orchestration.

Considering all the facts, we decided to go ahead with native Go plugins. They are as fast as native code once loaded, and given enough tooling, act just like regular Go code, along with all its niceties like type safety and none of the baggage of other alternatives.

Veto v2 would be a web server which loads rules from native Go plugins on boot and behave like a reverse proxy accepting incoming orders as HTTP requests, either rejecting them in place or proxying them to the upstream OMS.

A framework for writing rules

Rules in Veto v2 are now written in plain Go by the operators. A rule looks similar to the following sample rule.

Each rule is expected to provide three functions.

Rules are contained in the Validate functions that are expected to accept an interface and return a rule.Result. The contexts contain the controllers and data needed for validating the rule, and are passed by the host to the rule manager which iterates over all the rules. The host can then interpret the result and do what it needs to, in our case render a response to the user with a custom message, or proxy to the upstream.

Another added benefit of having written a custom go plugin based framework for rules, is that we can implement our own testing framework for validation of the rules. Every rule is expected to return its own testcases as a map[interface{}]e.Result where the interface is the context. This way if a rule implements all the testcases, we are sure that any minor refactor will be also correct in the future. This reduces the need for constant developer oversight and the testing needed for the rules. Also, the testcases provide extra documentation for the future.

Using Go plugins in your projects comes with a lot of caveats. As of writing, there hasn’t been much development on the feature recently. The commit history shows us that the last major commit happened nearly 2 years ago. On the gopher slack, the sentiment, more or less, is that this is not a priority anymore. Along with this, there are multiple issues that come up with maintaining projects that use it:

To learn more you can read this issue summarising some of the problems with go plugins.

Plugins works well if the projects bundles all the plugins in its own source tree and both the host and plugins are built together at the same time. But, that might limit the scope of a project. Externally maintained plugins are near to impossible to build independent of the host program.

To solve the issues listed above, we can use Docker to build both the host program and our custom plugins together. Using Docker, we are able to use emulated paths. This image also contains the source code of the host program. This image allows us to build and load the plugins separately from different machines, such as our CI/CD pipeline or a rule compiler as described further down the post.

In practice, we prepend the following dockerCommands, so that the paths to the go build command.

To combine multiple rules into a single plugin, we introduce the concept internal to our project called Compilation. A compilation step is similar to the build step, but combines multiple .go rule files which are stored in a folder into a single .so plugin.

The compilation command expects a folder containing the source code of all the rules, and the description.go which contains the meta information about what would be available in the rule.so file. It utilizes the build steps described in the section above, but adds pre-processing steps that help avoid a few of the Go plugin caveats.

As per our framework, every rule is expected to provide three functions to compile. These are in turn used by the validation pre-process to verify the rule.

Plugins can export any kind of data and functions from their source. Since, multiple rules need to export the same function, while compiling all the rules into the plugin, we traverse through the AST and modify the function names and prefix the rule name.

AddPrefixToSource is a function that prefixes the rule name onto the functions so they can be uniquely found when we load the plugin. For example, a rule with slug as a_sample_rule will be available in the plugin as E_a_sample_rule_Validate.

Another function called AddTimestampToSource is used in the pre-processing to enable realtime reloading of the plugin. Since Go currently can’t unload a shared library, we must load unique plugins in long running programs. This becomes a problem when we try to reload a plugin. This function makes the compiled rule unique, allowing it to be reloaded with the same name and same contents as well.

Now, the host can use the following DecompileRules function and obtain all the rules contained in the plugin.

Dashboard for the operators 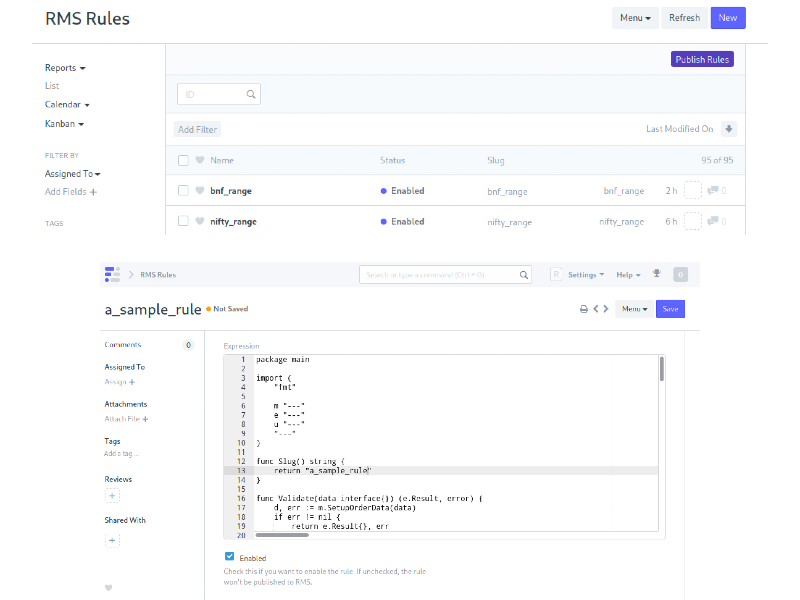 These are backed by two small deployments which run in an internal K8s instance with the validation and compiler veto servers.

The validation server has a handler which expects the rule source as a post param. It adds a constant with the current unix timestamp to the source and builds and validates the rule. If it passes, it returns true via an HTTP response. In case of a failure, it records the stdout and responds with why it failed, including the full Go build log, helping the operators know what happened.

Our compiler server is responsible for listening on an endpoint for a post request which initiates a sync with the admin panel and then runs the compile rules routine on the folder and builds the plugin in the appropriate mock folder. Then we push this built plugin to our production veto instance and issue a hot-reload.

The major lesson here is that DSLs are complicated and clever choices can become human usability bottlenecks in the long run. Excel like familiarity in the expressions might let operators write and manage rules with ease, but becomes a pain overnight as the business rules and their complexities start growing out of control. A language like Go, which is simple, reliable, and efficient, is easier to learn for the operator than a custom DSL, and the sheer extensibility for the developer. Trusting non-tech folks to learn Go instead of investing in learning a custom DSL is a viable alternative that we have been able to successfully implement at India’s largest stock broker. Writing a framework that abstracts the annoying caveats of an under-loved feature like Go plugins, to enable dynamic loading of Go functions to act as rules, is useful, considering the tangible benefits it presents when compared to writing custom DSLs.