Zerodha, now India’s largest stock broker, bootstrapped and profitable, turns ten years old this year. The Zerodha tech team turns seven years old. The tech team has remained largely elusive over the course of our existence. While we have pondered starting a tech blog for more than half a decade, we have often found ourselves too busy building the fundamental blocks underlying a stock brokerage. We have also been stalled by a sense of unpreparedness to talk to the world about our very unconventional setup. 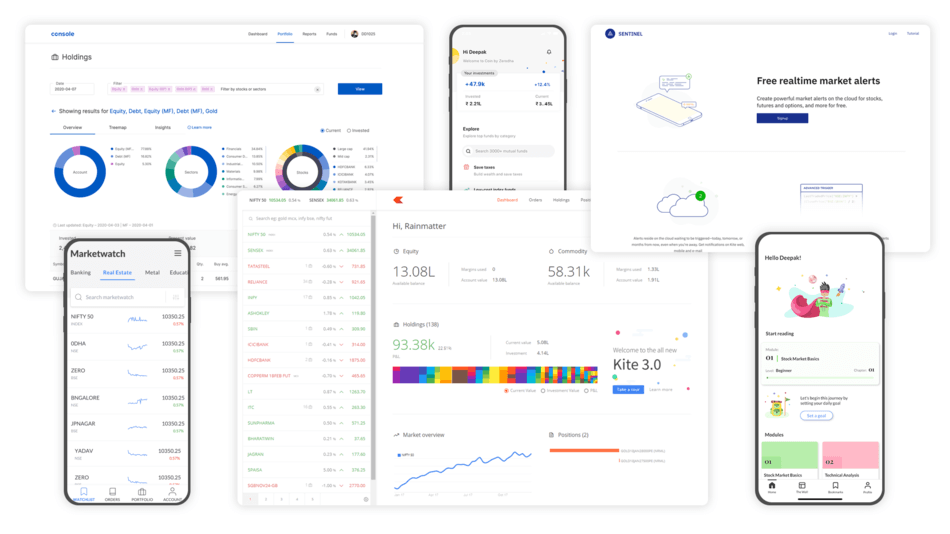 Zerodha was founded in 2010 as a small discount broking firm in Bangalore by two brothers and life-long traders, Nithin and Nikhil Kamath. In 2012, I was roped into building an investment app by an old friend from school, and by complete happenstance, we discovered Zerodha just because their office happened to be in the same vicinity where we would hangout.

By early 2013, we had stopped working on the app and had gone our separate ways after failing to get regulatory approvals. If it were today, we would have obtained the necessary approvals as the regulators are exponentially more tech savvy today than they were in 2013. I decided to stick on, primarily due to the sheer astonishment at the state of all things tech in capital markets then (none, that is), the excitement of building software in an untouched area, and really though, because Nithin and I got along really well. I had been a hobbyist developer / hacker for over a decade at that point, and it felt like I could continue being that, building software, despite being in a “corporate” setting, something I had always been skeptical about.

And build, we did. We founded the tech team in mid-2013. At that point, Zerodha had around 75 employees. Today, the tech team is 30 members strong, and the rest of the company has grown to ~1200 people across various departments like sales, operations, support, and compliance. Stock broking, especially in India, is a complex and hard gig.

The tech team has two mobile developers, two designers, two frontend developers, one test engineer, one devops engineer, and one liaison who helps us keep track of communication with other sprawling departments. The rest of us, including the aforementioned members who focus on specific areas, are fullstack developers who do pretty much everything. There are no dedicated project or product managers, and developers step up to these roles and natural leaders emerge. Products and technologies are built, maintained, and owned by small teams of two to four developers, and there are several overlaps between these micro teams.

Nobody in the team has any background in finance, and apart from a handful of developers, most have no prior work experience either. Everyone has been a hacker or a hobbyist straight out of college. What colleges, neither do we ask, nor do we keep a track of.

That a 30 member tech team has built and scaled a complex financial + stock broking stack from the ground up, built a whole suite of financial software for end users that people actually appreciate in an extremely complex, constraining, and rapidly changing regulatory environment, with zero prior industry knowledge, is quite a feat. More of an anomaly than a feat. I, however, find it natural and poignant that a group of hackers in the right environment guided by the right philosophies can be incredibly creative and productive, even in a place as unfashionable and uncool as the Indian stock broking industry. What used to be the norm—small groups of hackers building good software—has now transmogrified into being the exception.

Zerodha became the largest stock broker in India in January 2019, trumping stock brokerages operated by mega-banks. We achieved this slowly and organically. We have never raised external funding, have zero debt, and have been profitable YoY. We do not have a marketing team, have not advertised anywhere, and have let our services and products speak for themselves, building our userbase, brand, and trust over the years.

Here is a quick, broad, overview of our stack, before we start getting into deep-dive posts in the near future.

These are some of the broad guiding principles that have happened to work for us.

In all honesty, as a hobbyist developer with no prior experience working in a corporate structure or managing a team, I did not have anything to go by except for the hacker-first approach, and great luck in finding like-minded hackers who can meme-burn all day long, while continuously learning and producing quality work.

I am excited by the prospects of this blog. It has been long overdue. We are eager to use Zerodha as a case study to illustrate that it is possible to build not just good software, but large enterprises (“Unicorns”), with small teams of hackers, even in the unlikeliest of industries. Hopefully, members of the tech team will start finding time to make semi-regular appearances on this blog with their own experiences and technical insights.